“In the first quarter, we continued to make significant progress in our multi-year transformation as demonstrated by the organic growth in our fee-based, capital-light businesses and increased operating efficiencies,” said Alan B. Colberg, president and CEO of Assurant. “Despite the decline in earnings for the quarter, results were solid and exceeded our expectations. Looking forward, we remain focused on serving our customers while creating value for our shareholders through growth in our businesses, operating efficiencies and disciplined capital management.”

Beginning in first quarter 2016, Assurant is revising its financial supplement and corresponding news release to reflect the company’s ongoing multi-year, transformation to focus on specialty housing and lifestyle protection products and services. Assurant Health runoff operations, Assurant Employee Benefits, which was sold on March 1, 2016, and amortization of deferred gains on disposal of businesses have been removed from net operating income. Prior period amounts have been revised to conform to the updated presentation as reflected in the following table. In addition, the company has updated revenue categories for Assurant Solutions and Assurant Specialty Property to align with its key business lines as well as risk-based and fee-based, capital-light models. 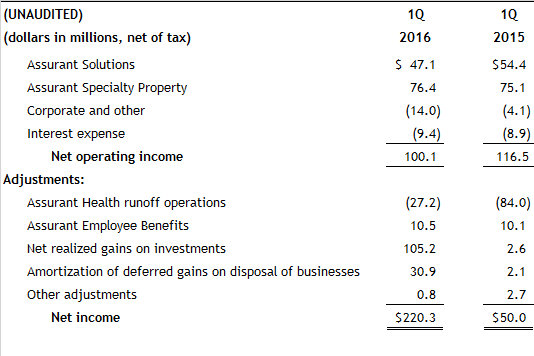 Note: Additional financial information, including a schedule of disclosed items that affected Assurant’s results by business for the last four quarters appears on page 19 of the company’s Financial Supplement, and is located in the Investor Relations section of www.assurant.com.

(a) Combined ratio for the risk-based businesses is equal to total benefits, losses and expenses, including reportable catastrophe losses, divided by net earned premiums and fees and other income, for lender-placed and manufactured housing and other businesses.

(b) Pre-tax margin for the fee-based, capital-light businesses is equal to income before provision for income taxes divided by total net earned premiums, fees and other, for multi-family housing and mortgage solutions businesses.

Based on current market conditions, for full-year 2016, the company expects:

Based on current market conditions, for full-year 2016, the company expects in regards to runoff operations:

Assurant, Inc. (NYSE: AIZ) is a global provider of risk management solutions, protecting where consumers live and the goods they buy. A Fortune 500 company, Assurant focuses on the housing and lifestyle markets, and is among the market leaders in mobile device protection; vehicle protection; pre-funded funeral insurance; renters insurance; lender-placed homeowners insurance; and mortgage valuation and field services. With approximately $30 billion in assets and $8 billion in annual revenue, Assurant is located in 15 countries, while its Assurant Foundation works to support and improve communities. Learn more at assurant.com or on Twitter @AssurantNews.

Some of the statements included in this news release and its exhibits, particularly those anticipating future financial performance, business prospects, growth and operating strategies and similar matters, are forward-looking statements within the meaning of the U.S. Private Securities Litigation Reform Act of 1995. You can identify these statements by the use of words such as “outlook,” “will,” “may,” “anticipates,” “expects,” “estimates,” “projects,” “intends,” “plans,” “believes,” “targets,” “forecasts,” “potential,” “approximately,” or the negative version of those words and other words and terms with a similar meaning. Any forward-looking statements contained in this news release or its exhibits are based upon our historical performance and on current plans, estimates and expectations. The inclusion of this forward-looking information should not be regarded as a representation by us or any other person that the future plans, estimates or expectations contemplated by us will be achieved. Our actual results might differ materially from those projected in the forward-looking statements. The company undertakes no obligation to update or review any forward-looking statements in this news release or the exhibits, whether as a result of new information, future events or other developments. The following risk factors could cause our actual results to differ materially from those currently estimated by management, including those projected in the company outlook:

(1)  Assurant uses operating return on equity ("Operating ROE"), excluding accumulated other comprehensive income ("AOCI"), as an important measure of the company’s operating performance. Operating ROE, excluding AOCI, equals net operating income (defined below) for the periods presented divided by average stockholders’ equity, excluding AOCI, for the year to date period. The company believes Operating ROE provides investors a valuable measure of the performance of the company’s ongoing business because it excludes the effect of Assurant Health runoff operations and the divested Assurant Employee Benefits business, which was sold on March 1, 2016. The calculation also excludes net realized gains (losses) on investments, amortization of deferred gains on disposal of businesses and those events that are highly variable and do not represent the ongoing operations of the company. The comparable GAAP measure would be GAAP return on equity (“GAAP ROE”), defined as net income, for the periods presented, divided by average stockholders’ equity for the year to date period. 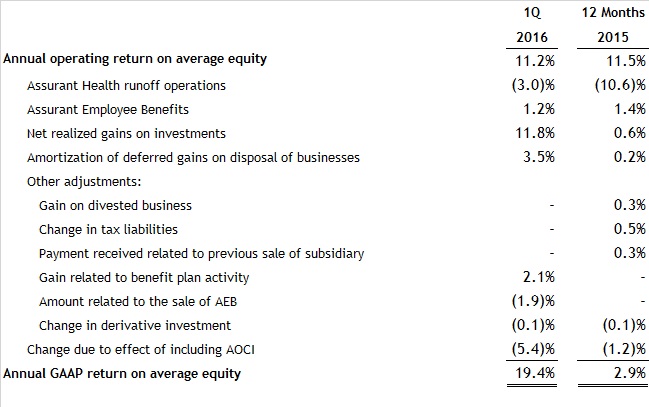 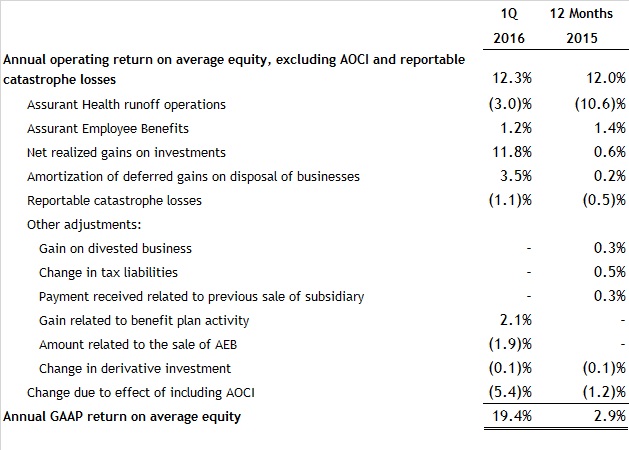 A summary of net operating income disclosed items is included on page 19 of the company’s Financial Supplement, which is available in the Investor Relations section of www.assurant.com. 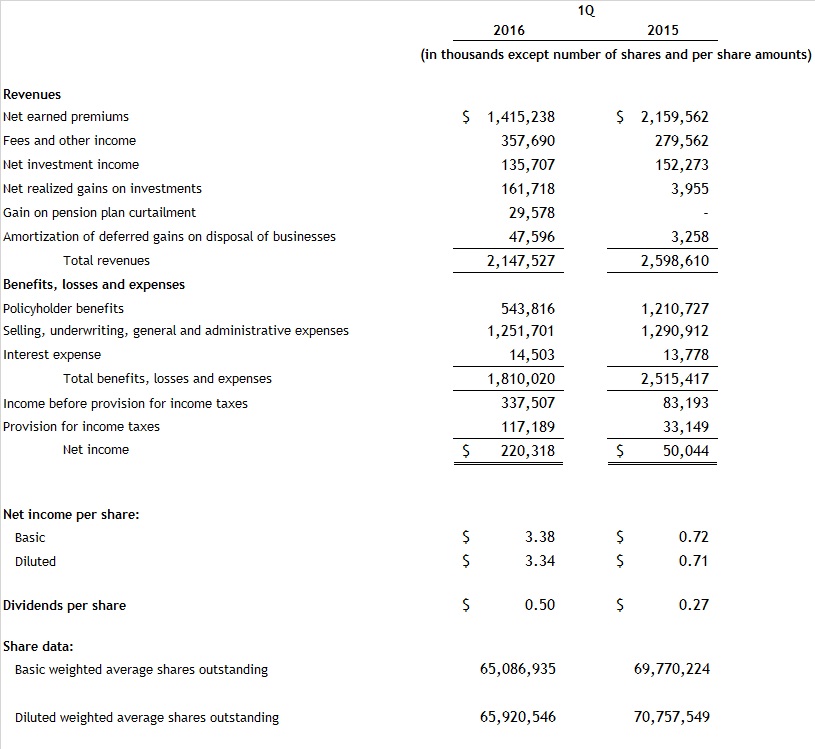 Assurant to Provide Flood Insurance for Nationwide Policyholders and Agents