Multiple factors are considered in evaluating the size and components of our reinsurance program including the estimated claims loss potential from various perils, the cost efficiency of the reinsurance coverage available and the credit quality, financial strength and claims paying ability of the reinsurers in the program.

Assurant placed its traditional catastrophe program in two phases, in January and June 2013, with more than 50 reinsurers rated A- or better by A.M. Best. The company supplements the traditional 2013 per-occurrence program through reinsurers, with multi-year fully collateralized coverage, financed with catastrophe bonds to further diversify sources of reinsurance capacity. The program provides protection against earnings volatility and helps safeguard Assurant's balance sheet.

An illustration of the 2013 Assurant catastrophe program's layered structure is available in the Newsroom section of www.assurant.com.

In the event of Florida hurricanes, Assurant's catastrophe program for per-occurrence coverage is net of any reimbursements from the FHCF. Traditional reinsurance is the only portion of the program that provides for an automatic reinstatement of coverage for a second occurrence under terms similar to the first occurrence. There is additional per-occurrence coverage of $102 million in excess of a $10 million retention for the Caribbean and $250 million in excess of a $9 million retention with an $8 million co-participation for Latin America.

Base pre-tax reinsurance premiums for the entire catastrophe program, which reduce net earned premiums in Assurant's financial statements, are estimated to be $245 million in 2013, compared with $233 million in 2012. The increase reflects additional coverage primarily resulting from growth in our exposure in catastrophe prone areas, which now accounts for more than 60 percent of the business. Actual reinsurance premiums will vary if exposure growth changes significantly from estimates or if reinstatement premiums are required due to reportable catastrophe events.

A comparison of the reinsurance retentions, limits and premiums for the prior and current programs is shown below2. 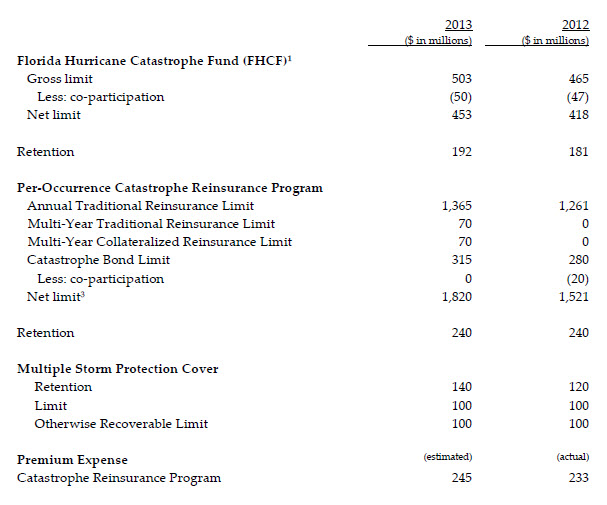 About Assurant
Assurant is a premier provider of specialized insurance products and related services in North America and select worldwide markets. Its four key businesses-Assurant Employee Benefits, Assurant Health, Assurant Solutions and Assurant Specialty Property- partner with clients who are leaders in their industries and build leadership positions in a number of specialty insurance market segments worldwide.

Assurant, a Fortune 500 company and a member of the S&P 500, is traded on the New York Stock Exchange under the symbol AIZ. Assurant has approximately $29 billion in assets and $8 billion in annual revenue.

Safe Harbor Statement: Some of the statements included in this press release, particularly those regarding reinsurance coverage or anticipating future financial performance, may constitute forward-looking statements that involve a number of risks and uncertainties. Our actual results may differ materially from those projected in any forward-looking statements. For a discussion of the factors that could affect our actual results please refer to the risk factors identified from time to time in our SEC reports, including but not limited to our 2012 Annual Report on Form 10-K and our first quarter 2013 Quarterly Report on Form 10-Q, each as filed with the SEC.