"We are pleased with first quarter results and continue to see progress in the areas we are targeting for profitable growth," said Robert B. Pollock, president and CEO of Assurant. "While the economic and regulatory environments require diligence and agility, our history of adapting to changing markets while serving our customers and building value for our shareholders is well established." 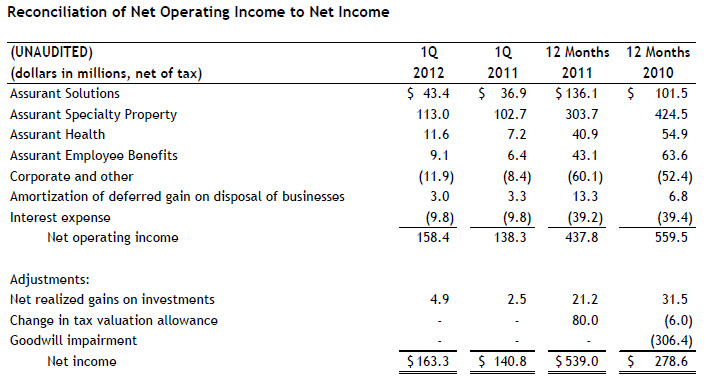 Note: Additional financial information, including a schedule of disclosed items that affected Assurant's results by business for the last five quarters (page 20), is available in the Company's Financial Supplement, located in the Investor Relations section of www.assurant.com.

Based on current market conditions for full-year 2012, the Company now expects:

Based on current market conditions for full-year 2012 and consistent with the 2011 year-end outlook, the Company continues to expect:


Safe Harbor Statement
Some of the statements included in this news release and its exhibits, particularly those anticipating future financial performance, business prospects, growth and operating strategies and similar matters, are forward-looking statements within the meaning of the U.S. Private Securities Litigation Reform Act of 1995. You can identify these statements by the fact that they may use words such as "will," "anticipate," "expect," "estimate," "project," "intend," "plan," "believe," "target," "forecast," or the negative versions of those words and terms with a similar meaning. Our actual results may differ materially from those projected in the forward-looking statements. The Company undertakes no obligation to update any forward-looking statements in this earnings release or the exhibits as a result of new information or future events or developments.

following risk factors could cause our actual results to differ materially from those currently estimated by management, including those projected in the Company outlook:
(i) the effects of the Patient Protection and Affordable Care Act and the Health Care and Education Reconciliation Act of 2010, and the rules and regulations thereunder, on our health and employee benefits businesses;
(ii) actions by governmental agencies or government sponsored entities or other circumstances that could result in the reduction of the premium rates we charge, increases in the claims we pay or other expenses;
(iii) loss of significant client relationships, distribution sources and contracts;
(iv) failure to attract and retain sales representatives;
(v) losses due to natural and man-made catastrophes;
(vi) a decline in our credit or financial strength ratings (including the risk of ratings downgrades in the insurance industry);
(vii) deterioration in the Company's market capitalization compared to its book value that could result in further impairment of goodwill;
(viii) unfavorable outcomes in litigation and/or regulatory investigations that could negatively affect our business and reputation;
(ix) current or new laws and regulations that could increase our costs and decrease our revenues;
(x) general global economic, financial market and political conditions (including difficult conditions in financial, capital and credit markets, the global economic slowdown, fluctuations in interest rates, monetary policies, unemployment and inflationary pressure);
(xi) inadequacy of reserves established for future claims;
(xii) failure to predict or manage benefits, claims and other costs;
(xiii) uncertain tax positions;
(xiv) fluctuations in exchange rates and other risks related to our international operations;
(xv) unavailability, inadequacy and unaffordable pricing of reinsurance coverage;
(xvi) diminished value of invested assets in our investment portfolio (due to, among other things, volatility in financial markets, the global economic slowdown, credit and liquidity risk, other than temporary impairments and increases in interest rates);
(xvii) insolvency of third parties to whom we have sold or may sell businesses through reinsurance or modified co-insurance;
(xviii) inability of reinsurers to meet their obligations;
(xix) credit risk of some of our agents in Assurant Specialty Property and Assurant Solutions;
(xx) failure to effectively maintain and modernize our information systems and protect them from cyber-security threats;
(xxi) risks related to outsourcing activities;
(xxii) failure to protect client information and privacy;
(xxiii) failure to find and integrate suitable acquisitions and new ventures;
(xxiv) inability of our subsidiaries to pay sufficient dividends;
(xxv) failure to provide for succession of senior management and key executives;
(xxvi) significant competitive pressures in our businesses; and
(xxvii) cyclicality of the insurance industry.

For a detailed discussion of the risk factors that could affect our actual results, please refer to the risk factors identified in our SEC reports, including, but not limited to, our 2011 Annual Report on Form 10-K, as filed with the SEC. 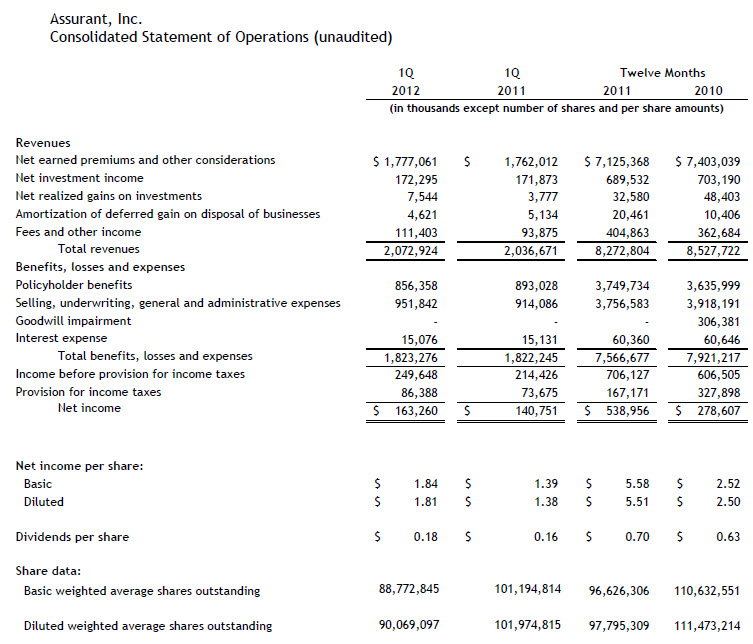 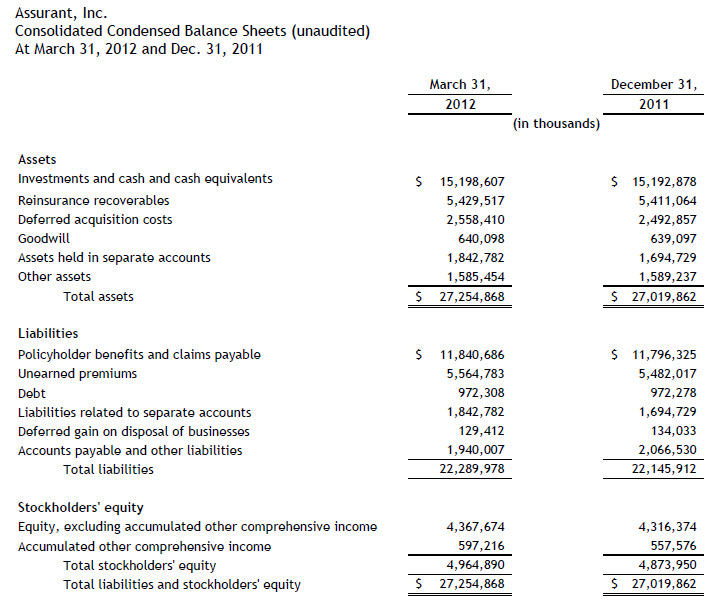