"Although we are committed to doing better, we were able to produce operating ROE of 10.1 percent in 2009 in an especially challenging economy," said Robert B. Pollock, Assurant's president and chief executive officer. "While we see encouraging signs, we are not content to wait for a full recovery. We have initiated significant actions to create our own opportunities for growth and to increase profitability.

"We are pleased with the new business momentum we are building. The cost saving measures we have already implemented will yield benefits in 2010 and going forward. Our strengthened capital position improves our flexibility to build shareholder value for the long-term."

Fourth Quarter 2009 Results
Net operating income for the fourth quarter of 2009 decreased to $101.6 million, or $0.86 per diluted share, compared to fourth quarter 2008 net operating income of $153.7 million, or $1.30 per diluted share. The primary reasons for the decline were restructuring charges of $12.3 million after-tax and a net operating loss at Assurant Health of $29.7 million that includes a litigation reserve increase of $24.0 million after-tax. 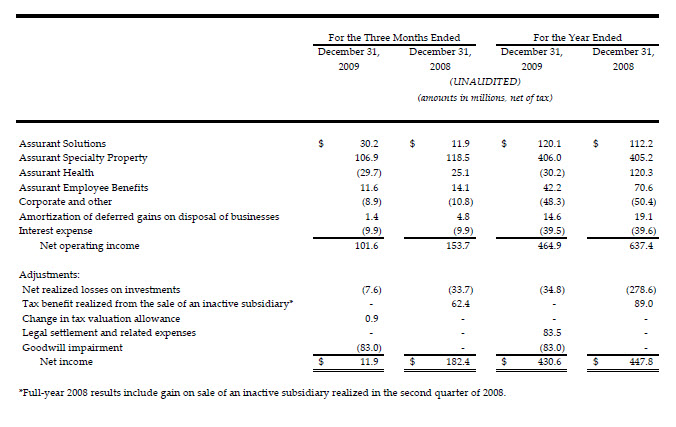 A schedule of disclosed items that affected Assurant's results by business for the last eight quarters can be found on page 20 in the Company's Financial Supplement.

A schedule of disclosed items that affected Solutions' results for the last eight quarters can be found on page 20 of the Company's Financial Supplement.

Twelve-month 2009 results also include a charge of $8.1 million after-tax for an unfavorable ruling in a lawsuit disclosed in the third quarter.

Premium declines for both the quarter and the twelve months occurred across all product lines driven by economic pressures in the small business sector as well as the previously disclosed loss of assumed client reinsurance premiums. The addition of two new reinsurance clients and the acquisition of a block of business in the fourth quarter 2009 partially offset the overall decrease. 2008 results included $5.9 million and $11.5 million for the fourth quarter and full year respectively in single premiums from closed blocks of business.

Net operating losses improved as a result of a $4.5 million tax benefit from the change in certain tax liabilities in the fourth quarter 2009. This improvement was partially offset by a $3.5 million after-tax civil penalty related to the settlement and conclusion of the SEC investigation regarding finite reinsurance. Full-year results also reflect $4.6 million after-tax of previously disclosed compensation expenses.

Goodwill Impairment
Following the completion of its annual goodwill impairment analysis in the fourth quarter, the Company recorded an impairment charge of $83.0 million to net income, or $(0.70) per diluted share, for the quarter and year to date. The impairment relates to goodwill that arose from a 2001 acquisition in Assurant Employee Benefits. The charge does not impact cash flow from operations or the Company's outlook for the business.

Share Repurchase Program
On Jan. 21, 2010, Assurant announced a settlement of the SEC's finite reinsurance investigation. With this matter concluded, Assurant expects to resume its share repurchase program after the earnings blackout period ends on Feb. 8, 2010. On Jan. 22, 2010, Assurant's board of directors authorized an additional $600 million for the repurchase of Assurant's shares. This brings the Company's total repurchase authorization to $770 million for use in the open market and/or for private transactions. The timing and amount of repurchases will depend on market conditions and other factors.

Assurant, a Fortune 500 company and a member of the S&P 500, is traded on the New York Stock Exchange under the symbol AIZ. Assurant has more than $25 billion in assets and $8 billion in annual revenue. Assurant has approximately 15,000 employees worldwide and is headquartered in New York's financial district. www.assurant.com.

Safe Harbor Statement
Some of the statements included in this press release and its exhibits, particularly those anticipating future financial performance, business prospects, growth and operating strategies and similar matters, are forward-looking statements within the meaning of the U.S. Private Securities Litigation Reform Act of 1995. You can identify these statements by the fact that they may use words such as "will," "anticipate," "expect," "estimate," "project," "intend," "plan," "believe," "target," "forecast," or the negative versions of those words and terms with a similar meaning. Our actual results may differ materially from those projected in the forward-looking statements. The Company undertakes no obligation to update any forward-looking statements in this earnings release or the exhibits as a result of new information or future events or developments.

The following risk factors could cause our actual results to differ materially from those currently estimated by management: (i) failure to maintain significant client relationships, distribution sources and contractual arrangements; (ii) failure to attract and retain sales representatives; (iii) deterioration in the Company's market capitalization compared to its book value that could impair the Company's goodwill; (iv) negative impact on our business and negative publicity due to unfavorable outcomes in litigation and/or regulatory investigations; (v) current or new laws and regulations, including proposed legislation relating to health care reform, that could increase our costs and/or decrease our revenues; (vi) general global economic, financial market and political conditions (including difficult conditions in financial, capital and credit markets, the global economic slowdown, fluctuations in interest rates, mortgage rates, monetary policies, unemployment and inflationary pressure); (vii) inadequacy of reserves established for future claims losses; (viii) failure to predict or manage benefits, claims and other costs; (ix) losses due to natural and man-made catastrophes; (x) increases or decreases in tax valuation allowances; (xi) fluctuations in exchange rates and other risks related to our international operations; (xii) unavailability, inadequacy and unaffordable pricing of reinsurance coverage; (xiii) diminished value of invested assets in our investment portfolio (due to, among other things, the recent volatility in financial markets, the global economic slowdown, credit and liquidity risk, other than temporary impairments and inability to target an appropriate overall risk level); (xiv) inability of reinsurers to meet their obligations; (xv) insolvency of third parties to whom we have sold or may sell businesses through reinsurance or modified co-insurance; (xvi) credit risk of some of our agents in Assurant Specialty Property and Assurant Solutions; (xvii) a further decline in the manufactured housing industry; (xviii) a decline in our credit or financial strength ratings (including the risk of ratings downgrades in the insurance industry); (xix) failure to effectively maintain and modernize our information systems; (xx) failure to protect client information and privacy; (xxi) failure to find and integrate suitable acquisitions and new insurance ventures; (xxii) inability of our subsidiaries to pay sufficient dividends; (xxiii) failure to provide for succession of senior management and key executives; and (xxiv) significant competitive pressures in our businesses and cyclicality of the insurance industry. For a detailed discussion of the risk factors that could affect our actual results, please refer to the risk factors identified in our SEC reports, including, but not limited to, our 2008 Annual Report on Form 10-K and upcoming 2009 Annual Report on Form 10-K, as filed with the SEC.

Non-GAAP Financial Measures
Assurant uses the following non-GAAP financial measures to analyze the Company's operating performance for the periods presented in this press release. Because Assurant's calculation of these measures may differ from similar measures used by other companies, investors should be careful when comparing Assurant's non-GAAP financial measures to those of other companies.

Please see page 20 of the Financial Supplement, which is available on our website at www.assurant.com, for a summary of net operating income disclosed items.

Assurant Board of Directors Declares Quarterly Dividend of $.15 per Common Share