New York, May 1, 2008—Assurant, Inc. ("Assurant") (NYSE: AIZ), a premier provider of specialized insurance and insurance-related products and services, today reported its results for the first quarter of 2008.

Robert B. Pollock, president and chief executive officer, said: "We are off to a good start for 2008, despite a slowing economy. Our record operating results are grounded in the enduring quality of our diversified, specialty insurance strategy. We are pleased with the progress we're making in areas we have targeted for growth and remain committed to managing our business for the long-term."

Net earned premiums of $1.94 billion in the first quarter of 2008 increased 10% from the same period in 2007, driven primarily by growth in Assurant Specialty Property and Assurant Solutions. 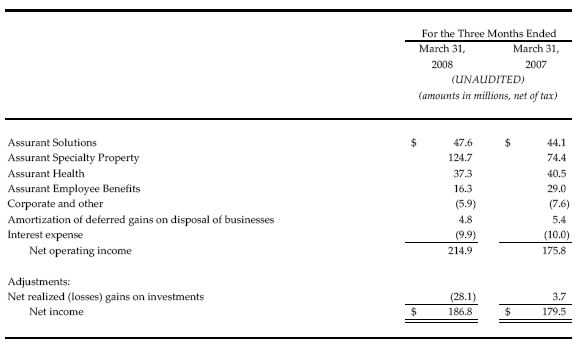 Assurant Solutions first quarter 2008 net operating income was $47.6 million, up 8% from the first quarter 2007 net operating income of $44.1 million. The increase was primarily due to $11.7 million of after-tax income from the accrual of contractual receivables established from certain domestic service contract clients. There was no investment income from real estate joint venture partnerships in the first quarter of 2008 compared with $9.4 million after-tax during the first quarter of 2007. Results in the quarter were impacted by continued international investments made to support the business' strategic expansion and by continued less favorable loss experience in the domestic service contract business.

Assurant Solutions first quarter 2008 net earned premiums increased 17% to $683.5 million from $583.0 million in the first quarter of 2007. The increase was primarily due to growth in preneed premiums resulting from the July 2007 acquisition of Mayflower National Life Insurance Company, growth in domestic and international service contracts and the impact of favorable foreign currency exchange. Excluding the impact of foreign currency exchange, Assurant Solutions net earned premiums in the first quarter increased 15% compared with the first quarter 2007. Results for the quarter were partially offset by the continued decline in domestic credit insurance premiums.

Assurant Specialty Property first quarter 2008 net operating income was $124.7 million, up 68% from $74.4 million in the first quarter 2007. The increase was primarily driven by the continued growth in creditor-placed homeowners insurance, continued favorable combined ratios and an increase in investment income due to an increase in invested assets. Results for the quarter were also positively impacted by $4.6 million after-tax from a client related settlement. There were no reportable catastrophe losses during the quarter.

Assurant Health first quarter 2008 net earned premiums decreased 3% to $496.1 million from $512.8 million in the same year-ago period. Continued growth in individual premiums during the quarter was offset by a decline in small group medical premiums.

Earnings Conference Call Assurant will host a conference call today at 9:00 A.M. (ET) with access available via Internet and telephone. Investors and analysts may participate in the live conference call by dialing 888-603-6873 (toll-free domestic) or 973-582-2706 (international); passcode: 41531604. Please call to register at least 10 minutes before the conference call begins. A replay of the call will be available for one week via telephone starting at approximately 12:00 P.M. (ET) today and can be accessed at 800-642-1687 (toll-free domestic) or 706-645-9291 (international); passcode: 41531604. The webcast will be archived for one month on Assurant's website.

Some of the statements included in this press release, particularly those anticipating future financial performance, business prospects, growth and operating strategies and similar matters, are forward-looking statements that involve a number of risks and uncertainties. Our actual results might differ materially from those projected in the forward-looking statements. For a discussion of the factors that could affect our actual results please refer to the risk factors identified from time to time in our SEC reports, including, but not limited to, our 10-K, as filed with the SEC.

Please see page 17 of the financial supplement, which is available on our website at www.assurant.com, for a summary of net operating income disclosed items. 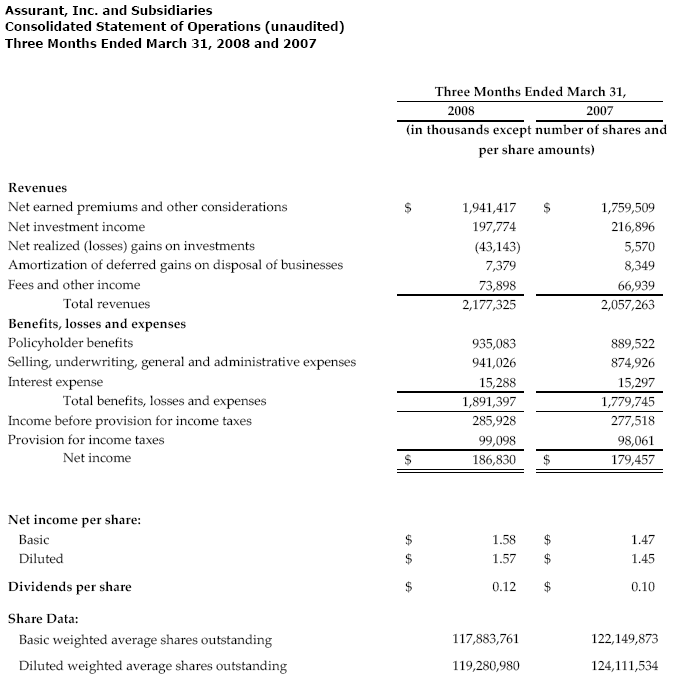 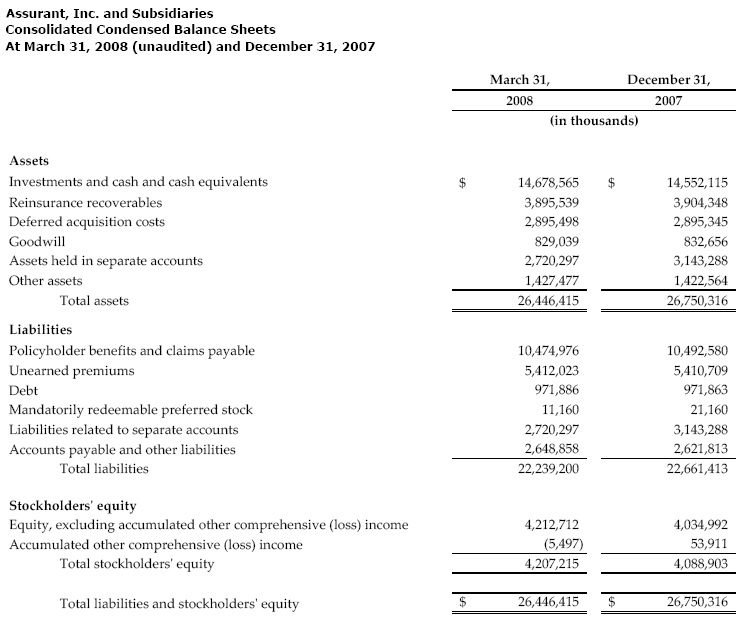