NEW YORK, June 18, 2008 — Assurant, Inc. ("Assurant") (NYSE: AIZ), a premier provider of specialized insurance and insurance-related products and services, today announced that it has finalized the structure of its 2008 property catastrophe ("CAT") reinsurance program, effective for both January 1 and June 1, 2008.

"We are pleased with the breadth of our catastrophe reinsurance program," said Gene Mergelmeyer, president and chief executive officer of Assurant Specialty Property. "We were able to secure higher levels of coverage to support our significant growth, while maintaining storm deductibles comparable to last year and under more favorable pricing. This year, we also initiated a deliberate long term strategy to secure a small portion of our per occurrence CAT reinsurance coverage on a two-year term basis to help ensure capacity and level pricing over time."

In structuring the property catastrophe reinsurance program, Assurant applies a disciplined risk management process including utilizing multiple catastrophe models to evaluate the estimated loss potential from various perils, analyzing the geographic spread of risk and quantifying the reinsurance cost relative to the coverage provided, as well as the credit quality, financial strength and claims paying ability of the reinsurers.

Assurant utilizes CAT reinsurance primarily for its Assurant Specialty Property business to protect the company's capital base from catastrophe risk for our customers and to lessen the variable effect of catastrophes on earnings for shareholders.

First, the Florida Hurricane Catastrophe Fund ("FHCF"), including the Temporary Increase in Coverage Limit ("TICL"), provides Florida-specific coverage. For Florida hurricanes, the FHCF/TICL program is utilized before Assurant's per occurrence property CAT reinsurance program. Retentions and limits are estimated based on the individual Assurant legal entities that participate in the FHCF/TICL program. In aggregate, the 2008 coverage provides for a $639 million catastrophic occurrence with a $515 million limit after a combined retention of $124 million.

Third, the company has placed aggregate hurricane coverage as protection for multiple storms with a limit of $90 million in excess of $80 million retention. Losses in excess of $10 million per occurrence are eligible and no one event can contribute more than $40 million.

A comparison of the reinsurance retentions, limits and premiums for the prior and current programs is outlined below1: 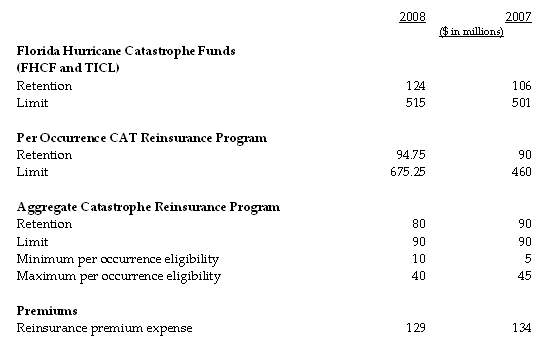 Assurant is a premier provider of specialized insurance products and related services in North America and selected international markets. Its four key businesses-Assurant Employee Benefits, Assurant Health, Assurant Solutions and Assurant Specialty Property-have partnered with clients who are leaders in their industries and have built leadership positions in a number of specialty insurance market segments worldwide.

Assurant, a Fortune 500 company and a member of the S&P 500, is traded on the New York Stock Exchange under the symbol AIZ. Assurant has more than $25 billion in assets and $7 billion in annual revenue. The Assurant Web site is www.assurant.com.

Safe Harbor Statement: Some of the statements included in this press release, particularly those anticipating future financial performance, are forward-looking statements that involve a number of risks and uncertainties. Our actual results might differ materially from those projected in the forward-looking statements. For a discussion of the factors that could affect our actual results please refer to the risk factors identified from time to time in our SEC reports, including but not limited to, our 2007 Form 10-K as filed with the SEC on March 3, 2008.