Robert B. Pollock, president and chief executive officer, said: "We are pleased with Assurant's strong first quarter performance, the best in our history. Tremendous results in our Solutions and Specialty Property businesses were the primary driver of improved net operating income. Our diversified specialty insurance strategy continues to deliver strong profitability and we are pleased with our progress in generating long-term profitable growth." 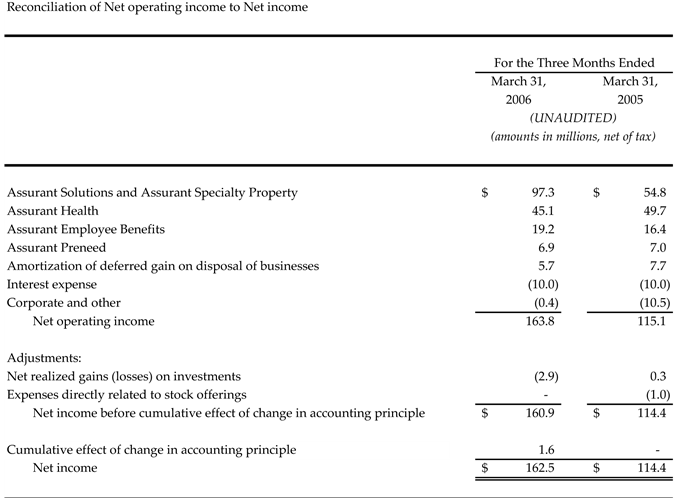 Assurant Solutions and Assurant Specialty Property first quarter 2006 net earned premiums increased 20% to $739.2 million from $615.2 million in the same year-ago period. The increase is a result of premium growth in all of our Specialty Property businesses, especially in creditor-placed homeowners, as well as growth in Solutions' domestic and international extended service contracts.

Assurant Health first quarter 2006 net operating income decreased 9% to $45.1 million from $49.7 million in the same period in 2005. The decrease is primarily the result of a decline in small group membership and an increase in expenses aimed at growing the individual markets business. Results benefited from $7.4 million pre tax of investment income from a real estate partnership. The combined ratio for the quarter was 91.6% as a result of stable loss ratios.

Assurant Health first quarter 2006 net earned premiums of $523.4 million decreased 5% from $549.5 million in the same period in 2005, due to the decline in small group premiums. Individual medical premiums increased despite a small decline in membership.

Assurant Employee Benefits first quarter 2006 net earned premiums decreased 6% to $326.1 million from $345.9 million in the same period of 2005. The decrease was driven primarily by lower sales and persistency due to changes to support the business' small case strategy. Disability premiums include single premium amounts of $33.9 million in the quarter related to the assumption of closed blocks compared to $26.7 million in the first quarter of 2005.

Assurant Preneed first quarter 2006 net earned premiums decreased 31% to $84.0 million from $121.2 million in the same period of 2005 primarily due to the sale of the preneed U.S. independent franchise. Lower U.S. premium growth was partially offset by continued growth in Canada.

Corporate and other net operating loss for the first quarter of 2006 was $0.4 million, compared to a loss of $10.5 million in the first quarter of 2005. The improvement in results is primarily the result of a reduction in expenses associated with the required change in accounting methodology for stock appreciation rights costs. Also, Corporate and other results include $4.8 million pre tax of investment income from a real estate partnership.

The company, which is traded on the New York Stock Exchange under the symbol AIZ, has over $20 billion in assets and $7 billion in annual revenue. Assurant has more than 12,000 employees worldwide and is headquartered in New York's financial district. www.assurant.com

Some of the statements included in this press release, particularly those anticipating future financial performance, business prospects, growth and operating strategies and similar matters, are forward-looking statements that involve a number of risks and uncertainties. For those statements, we claim the protection of the safe harbor for forward-looking statements contained in the Private Securities Litigation Reform Act of 1995. For a discussion of the factors that could affect our actual results please refer to the risk factors identified from time to time in our SEC reports, including, but not limited to, our 10-K, as filed with the SEC.

Assurant uses the following non-GAAP financial measure to analyze the company's operating performance for the periods presented in this press release. Because Assurant's calculation may differ from similar measures used by other companies, investors should be careful when comparing Assurant's non-GAAP financial measure to those of other companies. 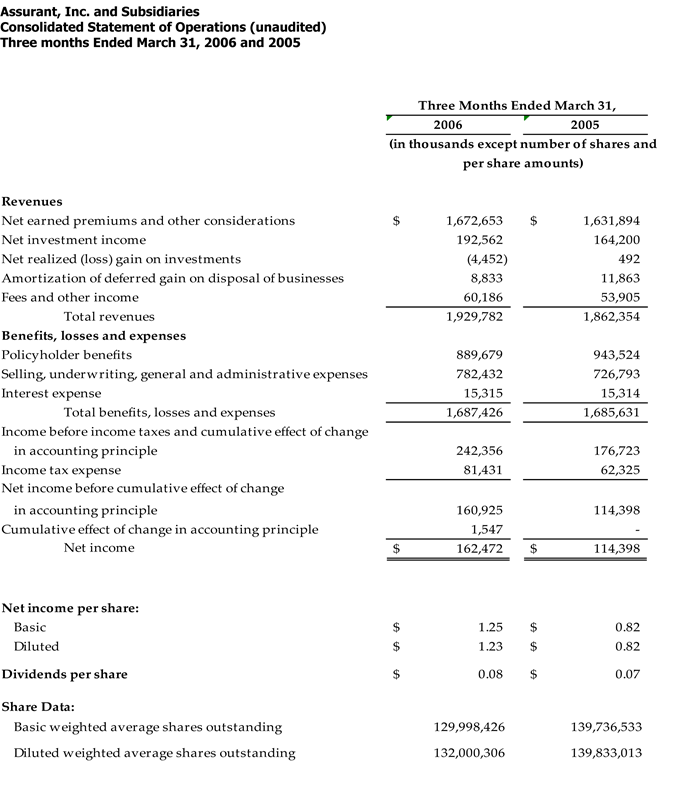