Compassion takes many different forms. For Kirsten Hale, it took shape in a simple strip of crochet. Kirsten, a true crochet maven in her spare time, works for Assurant in Health and Safety as an assistant office manager and says that looking after her colleagues is the part of her job she absolutely loves. She has been in the field for about six years. “Taking care of others is what I do,” she says, so when the COVID-19 pandemic broke out, it was natural for her to come up with a way to help out.

It all started when Kirsten saw a pattern on a crochet blog describing the making of an ear saver. This simple little device is used to relieve the rubbing and soreness of the ears that can result from wearing a PPE mask for an extended time.

“It’s a strip of crochet with two buttons on it,” Kirsten explained. “The loops of the masks hook around the buttons on the ear saver, which you put on the back of your head, above or below your hairline. I make them of 100% cotton so they can be washed or boiled for hygiene and I use plastic buttons because they’re more durable.” 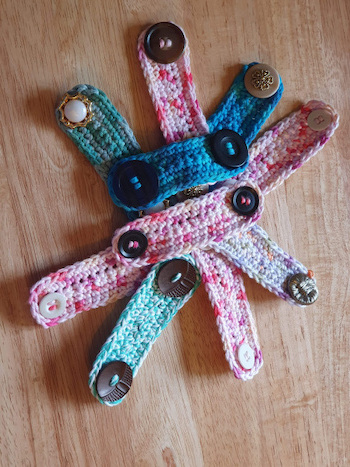 Kirsten has made over 600 of the devices and is still going, providing them to locations all around the U.K. from her village in the Forest of Dean: local hospitals, local care homes, general practitioner surgeries, chemists and friends. “I’ve had a lot of help,” she said.

“When I first started, I put a request for donations of cotton yarn or buttons on Facebook because the idea is for the ear savers to be free of charge. The response was overwhelming. One woman even said she didn’t have anything, but she had placed an eBay order for me. I can’t thank them enough because, without those donations, I wouldn’t have been able to make so many.”

Just as word of providing supplies for the ear savers spread fast, so did word of the opportunity to obtain them and, since then, the devices have spread widely over the U.K. A friend who donated buttons had a son working at a hospital in Leeds, nearly 200 miles away, where Kirsten wound up sending 50 ear savers. She sent many to Nightingale Hospital in London and to the hospital in Cardiff where her cousin works. “One nurse in Gloucester, the nearest large city to us, rang me to say she opened hers and put it on right away,” she said. 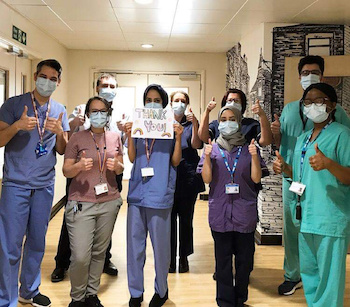 By this time, Kirsten has mastered the process of making the devices. “I’ve got it down to about ten minutes,” she said. “And I make the whole rainbow of colors. I drive my kids mad because one entire wall of my bedroom is yarn of all descriptions. Right now, I’ve got 28 or 29 colors of cotton. If someone wants a specific color, I can make it. Any color is fine. I’m not fussy!”

She isn’t fussy about making items other than ear savers, either. One of her projects was rainbows. “It’s essentially a crocheted rainbow and it sits on three or four white pompom clouds. You can hang it in your window.” Kirsten sold the rainbows and donated the proceeds to the National Health Service via the Assurant Cares portal, which resulted in a pound-for-pound match, doubling the money the rainbows raised.

“The response to the rainbows was really good,” Kirsten said, and that encouraged her to try other projects. She’s made a Front-Line Bear, who wears scrubs and a face mask. “It’s on its way to a nurse in our local hospice,” Kirsten said. “She’s a heart failure nurse who works in the local hospital as well. She was one of the caregivers for my husband during a long illness, so I’m glad I can do this for her.” 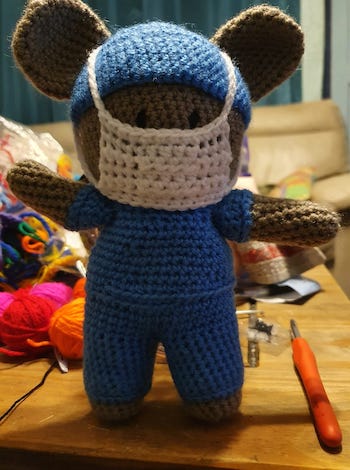 Kirsten has also helped her daughter, a checker at a local supermarket, raise money for cancer charities. She made 100 crochet awareness ribbons that people wear as brooches to show their support for the cause. 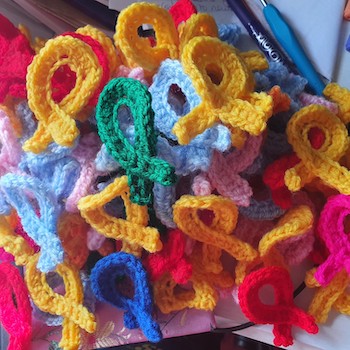 Remarkably, Kirsten has only been crocheting for about a year. A colleague at Assurant taught her the craft on their lunch breaks. “My husband had been ill for five years. He passed away last July. Crocheting for me is stress relief. It takes me away from everything,” she explained. “So, while I’ve been helping others, I’ve been helping myself by relaxing with crochet. I’m not completely selfless!”

Still, it seems that being helpful is in Kirsten’s blood. “I was raised in an army family,” she said. “My mum, dad and both my brothers were in the army, and you learn that you’re one big family, so you’ve got to look after each other. That naturally extends out to all your relationships. My brother, for example, volunteered to help in the hospital morgue on the night shift for 12 weeks when the pandemic started. It was a way for him to help see that those who had passed away were treated with dignity. And I’ve been cooking for my elderly neighbor since it started, since he can’t get out to shop.”

There’s no slowing down in sight for Kirsten’s crocheting or other compassionate pursuits. “It’s just good to help,” she said. “The people on the front line and the first responders do an amazing job. I couldn’t do what they do. So if something I’ve done can help them a little bit, that’s all I need."

Committed to Caring through Assurant Cares

Assurant Cares is Assurant’s community volunteering and giving program funded by the Assurant Foundation that focuses on supporting charities, dedicated to protecting, connecting and inspiring. We support our communities through giving and volunteerism, which increases employee engagement and reinforces our commitment as a responsible corporate citizen. See the 2020 Assurant Social Responsibility Report for additional insights on how Assurant makes a difference in the communities we serve.