SkaterAid: Thrills and Spills to Raise Money for the Brain Tumor Foundation for Children

Doing ollies and kickflips, participants on boards joined art and music enthusiasts at this year's Skateraid charity event in a metro Atlanta suburb and raised $22,800 for families with children undergoing cancer treatment.

Now in its ninth year, SkaterAid was launched to celebrate the life of Ian Wochatz, a Decatur, Ga. teen and avid skateboarder who succumbed to brain cancer on July 4, 2005 at age 15. The event gave family and friends a chance to celebrate his life with music, skateboarding and fun, and has now grown into a worthwhile cause of supporting families who are dealing with the tragedy of pediatric cancer. All funds raised go directly to families to help pay their bills while their children are hospitalized and undergoing treatment. 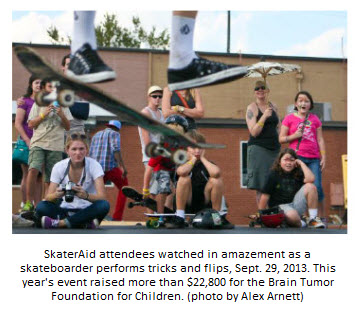 "SkaterAid started out as a way to help one family. Eight years later, it's become an event the entire community looks forward to," said SkaterAid creator Patrice Eastham, vice president of Business Communications at Assurant Solutions. "It's an unusual event because it truly appeals to all generations. Kids love the face painting and scavenger hunt. Adults enjoy the skateboard art auction and the chance to appreciate daredevil skateboarders from a ringside seat. And it's tough to find a more appealing event for teenagers."

"The best part, though, is the help SkaterAid brings to families challenged by pediatric brain cancer," said Eastham. "I'm really proud that Assurant has been there for us since the beginning, offering support year after year."

Since its inception, Assurant Solutions has raised more than $166,000 for SkaterAid. For more information visit skateraid.net or facebook.com/SkaterAidFestival.